Innovation marks GOLDONI’s return and at Fieragricola it will present its début in the precision viticulture sector.

GOLDONI is on a roll. After the enthusiasm that greeted the roll-out of the first tractor from the production lines on 18 January, after the production restarted at the beginning of the month in the historical plants of Migliarina di Carpi (MO), the company lands at Fieragricola 2016 focused on the future.

GOLDONI will be at the Verona show with its full range of products, in a stand shared with Matermacc and Arbos, the other two brands of the Lovol Arbos Group. The companyhas announced the precision agriculture project born from the collaboration with Spezia Srl, a company from Pianello del Tidone near Piacenza, which has been in the agriculture sector since 1949 and is today one of the industry leaders of machines for vineyards, under the TECNOVICT name.

The project, at the start-up stage, will see GOLDONI and TECNOVIT, work hand in hand to develop solutions aimed at applying precision viticulture techniques in the vineyard.

GOLDONI has responded to the requests of farmers to reduce the working times, with the GOLDONIEnergy 60 combined with the  111VRTGPS leaf-stripper at variable rate and automatic TECNOVICT foliage approach system.They will both be on display at the Dinamic Show, Fieragricola’s demo area for highly innovative equipment.

The preview of the project at Fieragricola is representative of the restart and relaunch of the brand from Modena, which is perfectly in line with the present and future aims of the Lovol Arbos Group: environmental protection, sustainable development of productions, greater product quality and savings in economic terms.

Verona will therefore be the first step in GOLDONI’s implementation of its current and future product range, which is one of the objectives of the three-year business plan, part of the rescue plan announced by the Lovol Arbos Group.

The plan, whose implementation is closely linked to the synergies with the Lovol Heavy Industry Ltd and the Lovol Arbos Group, as well as relaunching the company by modernising and increasing the range of products, will include a radical change to the organisational model and the production techniques.  The distribution network will also be reorganised, in order to achieve the expansion and internalisation objectives. 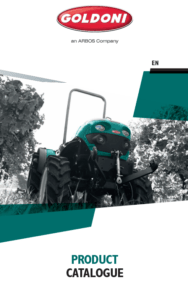